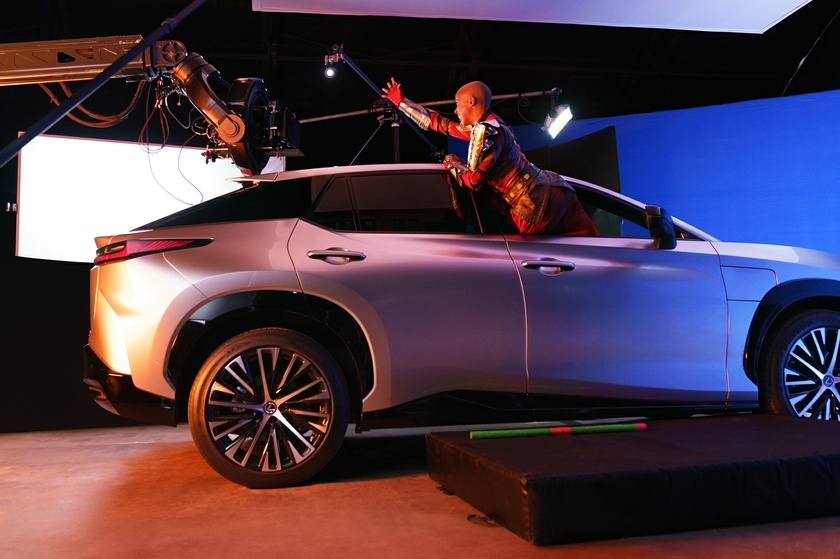 TORONTO, ONTARIO – OCTOBER 14th, 2022 – Quick thinking, a spear and the all-new, very agile, 2023 Lexus RZ 450e is all you need when you’re the formidable Dora Milaje, evading a host of villainous pursuers. Marvel Studios fans and car enthusiasts can buckle up and take a ride with the squad of Wakandan warriors as Lexus debuts its marketing campaign, including a long-form video, “An Electric Future,” featuring the luxury brand’s first-ever battery electric vehicle. The marketing campaign marks Lexus’ third collaboration with a Marvel Studios property ahead of the release of Marvel Studios’ “Black Panther: Wakanda Forever,” in theatres November 11.

While the Lexus LC 500 Convertible and the Lexus GX make appearances in the actual film, the 90-second collaboration video takes viewers on an exhilarating ride in the first-ever Lexus RZ 450e. Set in the Marvel Cinematic Universe with members of Wakanda’s all-female Royal Guard, the Dora Milaje, led by General Okoye (played by Danai Gurira), the audience follows the elite trio as they nimbly navigate pursuers in the Lexus RZ – a luxurious, technologically advanced vehicle fit for everyone.

“By returning to our successful relationship with Marvel Studios for the highly anticipated sequel to ‘Black Panther’ we are taking this collaboration to another level,” said Vinay Shahani, Lexus vice president of marketing. “The technology, creativity, and imagination we encounter in the futuristic nation of Wakanda is a natural fit for the sustainable, global society Lexus envisions with the introduction of our most advanced vehicle ever, the fully-electric RZ 450e, further extending our electrified vehicle portfolio.”

“The power, elegance, and future-forward vision of the Lexus brand aligns perfectly with the Black Panther franchise. We couldn’t be happier to team up with Lexus once again to bring an action-packed story and supporting 360 campaign to life,” said Mindy Hamilton, Senior Vice President of Global Partnership Marketing at The Walt Disney Company.

Lexus’ collaboration with Marvel Studios and the ad creation is being led by Lexus’ agency of record for Black, Hispanic and LGBTQ+ audiences, Walton Isaacson. The commercial was directed by Anthony Leonardi III, an award-winning, fourth-generation filmmaker who is no stranger to Marvel or Lexus having been involved with Marvel Studios’ “Avengers: Endgame” and the Lexus “Parking Spot” ad in support of Marvel Studios “Eternals.”

When asked about her involvement in the ad, actress Gurira said, “I think anytime there is a passion for innovation and seeking a better way for the world to function you’re being a little ‘Wakandan’…Lexus is being a little ‘Wakandan’ right now,’” said Gurira. “We’re seeing Lexus using the most advanced way to benefit society, our environment, and the world. That is definitely something that is deeply ‘Wakandan.’ Lexus is obviously ahead of the curve in so many ways – it’s very welcoming to see.” “An Electric Future” will be featured in an integrated marketing campaign, with placements across a variety of media platforms including broadcast, digital, advanced TV and social channels. The campaign will also be supported through several noteworthy media partnerships.

Lexus Canada is the exclusive Canadian distributor of Lexus luxury cars and sport utility vehicles through a sales and service network of 40 dealers across Canada. Guests have access to a wide range of luxury and performance vehicles with a total of 12 Lexus nameplates available in Canada, including the largest luxury hybrid lineup of 6 hybrid models. Inspired by bold design, intuitive technology, and peak performance, Lexus is committed to delivering the highest quality products and services and creating amazing experiences for their Guests. The Lexus RX 350 and RX 450h are built at Toyota Motor Manufacturing Canada’s (TMMC) award-winning Cambridge South plant. For more information about Lexus and Lexus products, please visit: www.lexus.ca.

In Marvel Studios’ “Black Panther: Wakanda Forever,” Queen Ramonda (Angela Bassett), Shuri (Letitia Wright), M’Baku (Winston Duke), Okoye (Danai Gurira) and the Dora Milaje (including Florence Kasumba), fight to protect their nation from intervening world powers in the wake of King T’Challa’s death. As the Wakandans strive to embrace their next chapter, the heroes must band together with the help of War Dog Nakia (Lupita Nyong’o) and Everett Ross (Martin Freeman) and forge a new path for the kingdom of Wakanda. Introducing Tenoch Huerta as Namor, king of a hidden undersea nation, the film also stars Dominique Thorne, Michaela Coel, Mabel Cadena and Alex Livanalli. “Black Panther: Wakanda Forever,” directed by Ryan Coogler and produced by Kevin Feige and Nate Moore, opens in theatres across Canada on November 11.